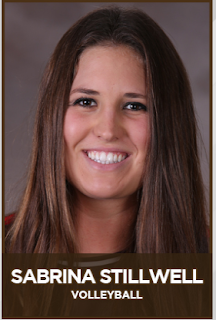 Sabrina Stillwell, Volleyball, Freshman, Laguna Beach, Calif.
Freshman Sabrina Stillwell recorded 5.00 kills per set on .403 hitting last weekend and landed 32 kills – the second most in a single match in school history – vs. Columbia as Brown beat Cornell (3-0) and Columbia (3-2). Against the Lions, Stillwell finished just two kills shy of the program record for kills in a match and became just the fourth Bear to record 30 or more kills in a match, fueling the Bears – who trailed 2-0 in sets – to the comeback win. She hit .466 in the match and posted seven or more kills in each of three sets. For the week, she tallied 40 kills with nine errors on 77 attempts.
( from www.brownbears.com posted 10/5/15)
at 4:37 PM