Saturday, March 26, 2016, the day before Easter, marked the passing of Fr. Howard V. O'Shea, Brown's Franciscan Catholic chaplain for 27 years. If you remember someone walking around campus in a brown robe with rope belt and sandals, maybe wearing a newsboy's cap, you remember Fr. Howard. 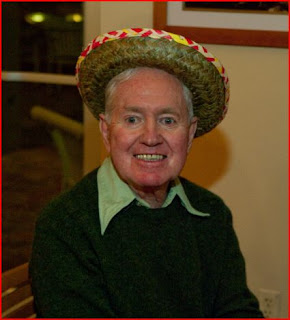 Born in Boston, Howard Vincent O'Shea was just old enough to be trained in Japanese by the Army in the last year of WW II. After mustering out, he studied English at Harvard, and graduated in 1949. Working several jobs, he finally entered the Franciscan order of Catholic priests, was ordained in 1958, and promptly became a problem, as no one could figure out what to do with this energetic, bright-eyed, upbeat intellectual sworn to poverty and the order of St. Francis. No one could figure out how to calm down the boisterous folks at Brown, either, and perhaps hoping the two problems would destroy each other, Fr. Howard was dispatched up the hill in 1966. This was a match truly made in heaven, lasting almost 3 decades.

You need not have been Catholic or anything else to have been Fr. Howard's friend. His door was open to absolutely everyone, no matter how big or small their concern. But he took special care of his Catholic flock. At an Ivy League school during the Vietnam War, he had students converting to Catholicism - go figure! In my time at Brown, when wild clothing was de riguer, no one had a better outfit than the brown drill cloth of a Franciscan, and the young-at-heart chaplain loved walking around wearing it, smiling and waving to everyone.

Fr. Howard will be best remembered, though, for his annual Money Sermons and his Holy Parties of Obligation.

Once a year, he would lecture us on the importance of money in the church, and remind us that the money in the collection was for the use of the congregation, and the congregation was us. Therefore, if you were a bit short that week, instead of putting some in, take some out! As we all groaned, he insisted, "No, no, people, I am SERIOUS! I was a student once. I know how it is. If you need cash help yourself! And, if you don't want to, see me after mass, and I'll help yourself!"

In the late 1970's, Fr. Howard began using some of that money to host Holy Parties of Obligation. He expected all good (and so-so) Catholics to show up and have a good time, and half a dozen times a year celebrated important dates like St. Francis of Assisi's day (Oct. 4). His goal was to build real friendship and community among his flock, and remind everyone that no one at Brown is alone - no matter who you were, you were invited to a party. And, of course, to have the absolute rocking-est St. Patrick's Day party in New England - maybe North America.

I've thought often about what a big difference he made just staying in one place all those years. Few people touch more lives for the better.

The photo above is from a party about 7 yrs ago. It is undeniably Fr. Howard, and will have to do until I get a holier one. I'd say I'm sad for his death, but it is hard to be sad thinking of Fr. Howard, and he would not want us to be.