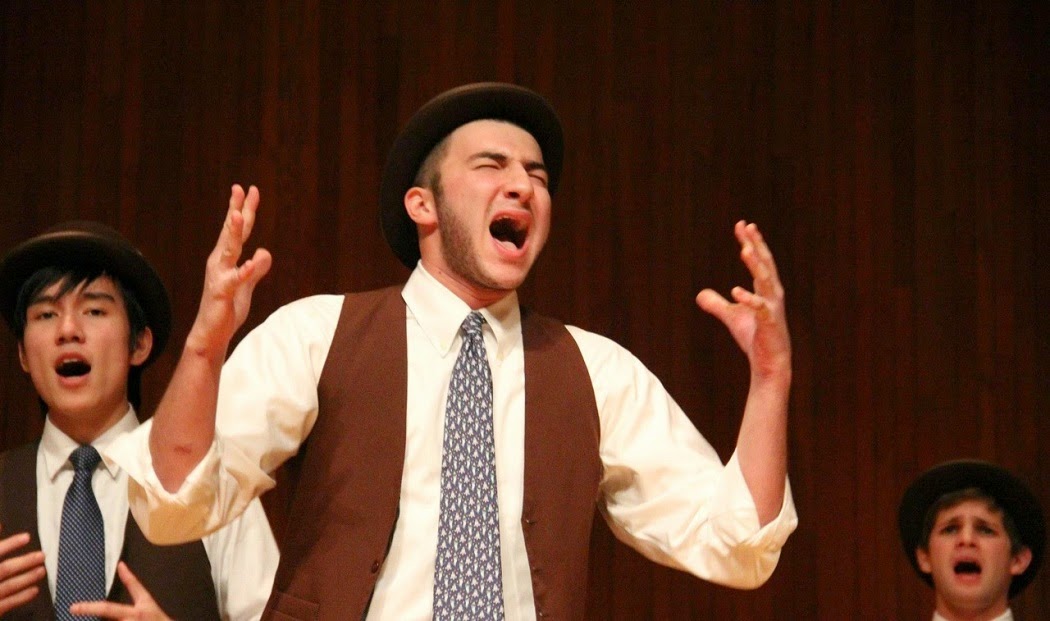 Click for more information or tickets
For more info. text or call Scott at 949-636-1975 or email scott.ed@cox.net

Farewell to the Barus-Holley parking lot

My favorite memory of the soon-to-be-gone parking lot just south of BH had to do with (the late) Engineering Prof. Don Avery, one of the most outrageous people on campus, who often rode his motorcycle to the office. To protect the bike, he used a heavy chain and special lock when he parked it in that lot.

Motorcycles with helmetless riders wearing aviator sunglasses were popular around the parking-challenged Brown campus in my student days. These bikes were very hot theft targets – a fraternity brother had his BSA swiped and was told by the police that odds of recovery were less than 1 in 10. For him they proved to be zero.

Mr. Avery was constantly trying new tricks with materials, and loved putting them to the practical-use test. He had put a special ultra-hard hasp on the motorcycle lock, and then did some sophisticated case-hardening on the heavy steel chain. “Case-hardening” the steel gave each link a very hard but tough surface “case,” difficult to cut or crack. Meanwhile the inner part of each link, under the "case," retained the toughness and strength of steel. Being steel, the outer case was not brittle like cast iron or other hard metals.

One mid-winter night about 6:30, Mr. Avery took the elevator down to the BH lobby, bundled up and ready to unlock his bike for the chilly ride home. From the lobby, he could see in the darkness that two men with a 4-foot pair of bolt cutters were testing his chain’s performance. One was holding the bolt cutters on the chain while the other was jumping up and down on the end of the cutters, trying to get enough force to cut it. Technology forever! The case-hardened steel was winning the battle.

Mr. Avery retreated inside to the nearest phone and called the police, who arrived promptly and discreetly. The would-be thieves were so involved in trying to cut through the chain they did not notice the armed audience arriving to watch their act. The police took two motorcycle thieves off the streets that night, and after filing a preliminary report, Mr. Avery unlocked his motorcycle, bundled up his slightly-nicked chain, and headed home.

A lot of other historic things happened in that lot, I’m sure, but I liked this one.

November 12, 2014   Contact: Courtney Coelho   401-863-7287
BrownConnect, launched today, is an initiative that will provide Brown students with streamlined access to summer internships, research, and funding — and a suite of digital information services to review opportunities and engage with a global network of Brown alumni, parents, and supporters.
BrownConnect
at 5:24 PM No comments: 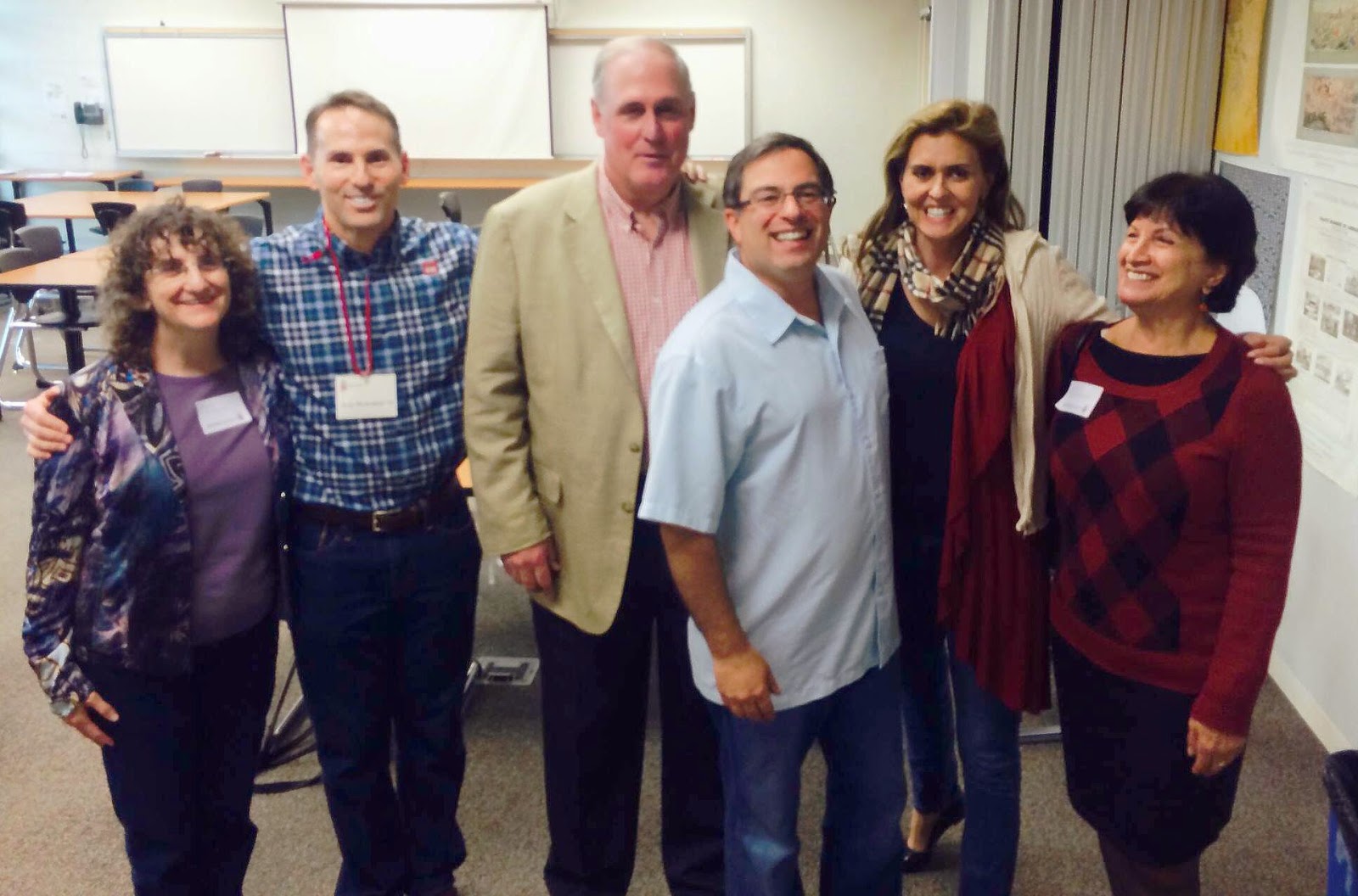 
Interesting factoids from the summit:
It's fun, it's important, and it helps the overworked Brown admissions team get a well-rounded profile on the over 30,000 applicants they must screen each year. Please volunteer to help in this process.

BCOC learns about robots in our future from Chad Jenkins, Brown professor of computer science and robotics. 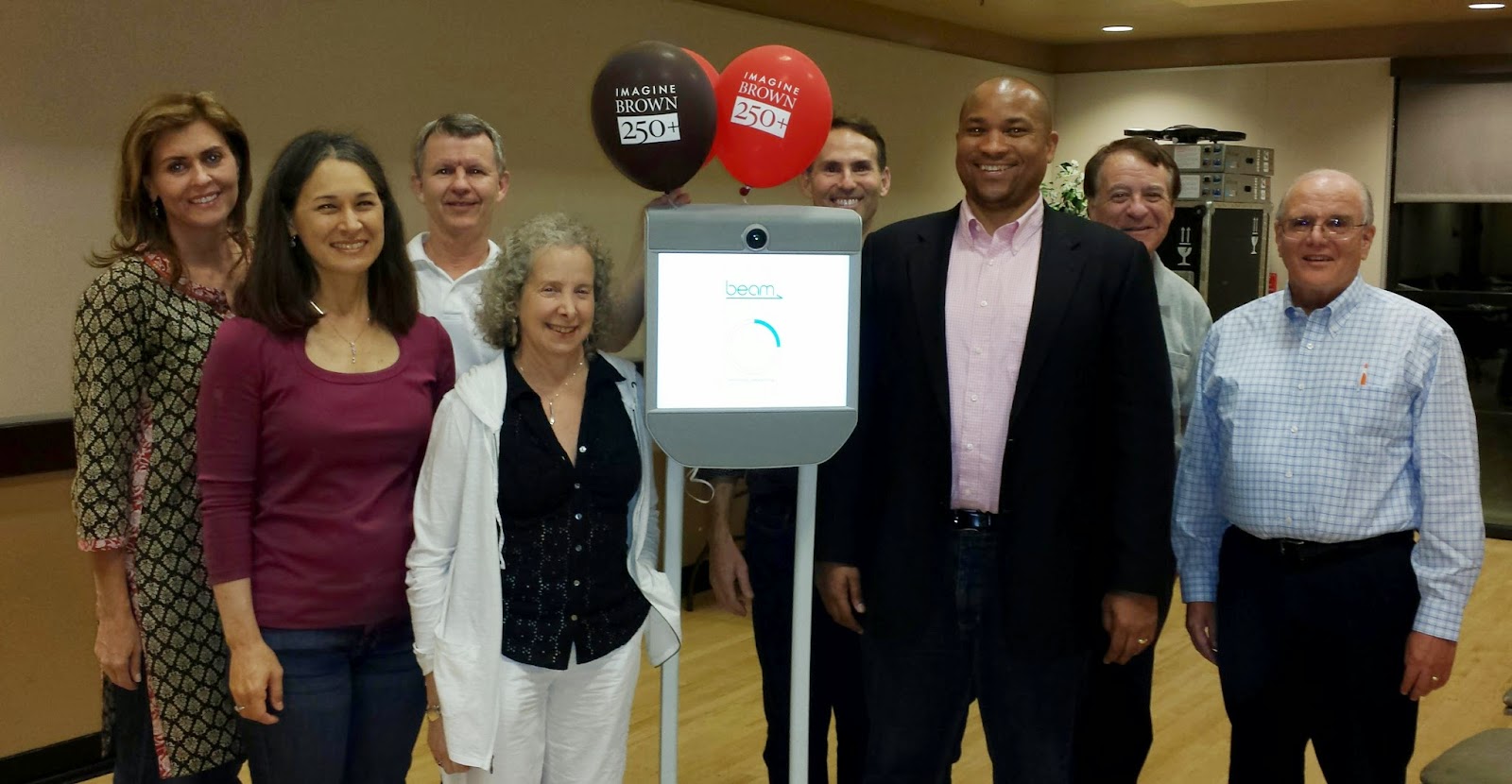 Brown Club OC hosted another great event Friday night featuring Brown Computer Science/Robotics professor Chad Jenkins. BCOC welcomed alumni, local students and members of the Dana Point Robotics Club to our event. The crowd was treated to a live link with Brown's robotics lab, Professor Jenkins' 11 year old daughter remotely driving the robot around our room from her home in Rhode Island, and a demonstration of a remote controlled drone - a real crowd pleaser for the younger members of the audience who were allowed to pilot the craft using their tablet computers. BCOC looks forward to welcoming Professor Jenkins back again soon for an encore presentation!

Next up, an interview workshop by Brown Dean of Admissions, Jim Miller, at Sage Hill School on Saturday, Nov. 15 from 1:30 to 3:30. For those who would enjoy learning everything you want to know about the Brown admissions program but were afraid to ask - This Is For You! Attendance is restricted to Brown Alumni only. Questions and rsvp to Brown Admissions workshop rsvp
at 4:54 PM No comments:

From: Making the Grade: America's Most Beautiful College Campuses

"Founded in 1764, Brown University moved to its current College Hill location in 1770. An architectural tour de force, the campus is loaded with buildings that represent seemingly every type of design styles: Georgian, Beaux-Arts, Venetian Gothic, Ruskinian Gothic (really all kinds of Gothic), and Greek Revival. Don’t miss Robinson Hall, by the way. Built out of red brick and sandstone, it’s crowned with a rotunda framed by scalloped balconies."
https://www.yahoo.com/travel/making-the-grade-americas-most-beautiful-college-98246095642.html
at 12:52 PM No comments:

On this day in 1764, a charter was filed to create the college that would become today's Brown University. The charter was executed under the authority of King George III. Happy Birthday, Brown!!http://en.wikipedia.org/wiki/History_of_Brown_University 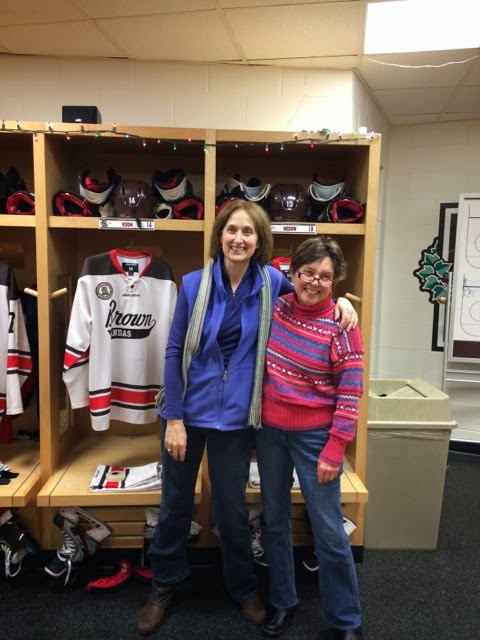 It's 250 yrs. for Brown, and 50 years for Brown's women's Ice Hockey team. We of an age remember the most feared women's hockey team in the U.S. (the ONLY women's hockey team in the U.S.), the mighty Pembroke Pandas. Reuniting from those days at Meehan last week were center Alli McMillan (L) and right wing Susie Barnes Waldrop '72 (R). They had a trip to Canada each winter to play other female college hockey teams - there were none south of the border. It's been a while since these two suited up - but note jerseys in the locker behind them say "Brown Pandas." Pembroke lives, ladies!
at 2:20 PM No comments:

Los Angeles native Gabriel Kahane has quickly become one of the stars of the Brooklyn music scene. Gabe is a singer-songwriter, pianist, and occasional banjo-player who became known for his 2006 song cycle “Craigslistlieder”—a series of songs inspired by ads posted on Craigslist. Since then he has composed music for the Public Theatre & Yale Repertory Theatre, collaborated with Rufus Wainwright and Sufjan Stevens, and received commissions by the Brooklyn Academy of Music. His first album “Where are the Arms” was released in 2011 to stellar reviews. His latest song cycle, "25 Addresses in Los Angeles” – a musical ode to the city that is constantly reinventing itself—premieres at the Laguna Beach Music Festival on Saturday, Feb. 8.

To attend this complimentary concert Tues. February 4 at 6:45 p.m. with post event “Meet and Greet” for Brown Club members from 8:30-9:00, please click on Gabe Kahane Concert at Sage Hill School

Professor Matthew Gutmann comes to Orange County on Tuesday, February 18 to present "Men are Animals in Love and War".

Gutmann is Professor of Anthropology and Faculty Fellow at the Watson Institute for International Studies at Brown University. As a scholar, his research and teaching have focused on studies of masculinity; public health; politics; and the military.

From 2009 to 2013, Gutmann was Vice President for International Affairs at Brown, leading the University's efforts to build collaborations and exchanges with leading institutions around the world, recruit top faculty and students, and oversee major programs relevant to internationalization. He has also been a visiting professor in China, France, Mexico, and Spain. In addition to working in Latin America for the last two decades, Gutmann's undergraduate major was modern and classical Chinese.

Come join us for a lively discussion about a key aspect of human nature and its impact on culture the world over.

Directions to the University Club at UC Irvine: Directions

Alumni, Parents and Friends of Brown,


2013 has been an exciting and productive year for your Club!


We averaged one event per month, and activities covered the gamut from lectures on cultural, political and social topics to mixers centered on Brown football, networking with other Ivy alumni, and hiking in the great OC outdoors. We also hosted a musical concert, attended a comedy show, volunteered for the Brown interview program, met President Paxson and introduced our Club to the greater Southern California Brown Alumni community.  Some particulars:


3.       April 2013 - We welcomed this year’s successful OC applicants at an Acceptance Party hosted by Angela Gupta at her beautiful, Shady Canyon home.


4.       May 2013 - The Pembroke Institute (TPI)director, Professor Kay Warren, addressed 14 club members at Board member Chiyo Rowe’s lovely Pelican Hill home regarding the history and mission of TPI.  Club board members collectively raised $1,000 and donated to the Institute on behalf of the Club.


5.       June 2013 - Jabberwocks concert at Temple Beth El in Aliso Viejo, arranged by Chiyo Rowe.  50 BCOC members, friends and their families enjoyed the concert, followed by an a capella singing class for the kids.


6.       June 2013  - Faculty superstar Barbara Tannenbaum presented her inimitable talk on Public Speaking at the Gupta home. 50 members and friends attended this popular event . As per Club tradition, the Board hosted a post-event dinner and presented a gift book to the speaker.


7.       September 2013 - Brown at Harvard football game mixer at Oggi’s in Mission Viejo organized by Bill McNeely. 15 alumni, parents and friends enjoyed beer, snacks and the game on the patio at Oggi’s.


8.       October 2013 - Best Colleges Mixer at Blue Water Grill in Tustin. 15 Brown alumni attended the 4th annual occurrence with over 100 participants from Ivy and other renowned schools. Thanks to Jarrid Johnston’s outreach, this was our most successful Young Alumni event of the year.


9.       October 2013 - Christina Paxson Reception at The California Club. 4 Board members were among 300 SoCal Brown alumni in attendance, and yours truly was honored to make closing remarks and introduce our club to the greater LA alumni community.


Thanks to you for your support this year.
We look forward to more great events in 2014 as we celebrate Brown’s 250th anniversary!
Your Club has a new Board for 2014 and a brand new website at http://browncluboc.blogspot.com/


We invite you to browse the site and to become a dues paying member of Brown Club by signing up now at:


You are our primary source of support, and your dues to Brown Club Orange County go exclusively to fund the activities of this club. Your contributions to Brown or other alumni groups do not go to this club, so join today and enjoy discounts and other member benefits for all of 2014.


Best wishes for a happy, healthy, Brunonian 2014. Looking forward to seeing you all this year!